Ted Lasso: What We Can Learn From The Emotionally Smart TV Show

Every now and again a TV show appears that does not make a huge initial splash, but slowly but surely gains momentum and is soon known as one of the best shows available. Ted Lasso on Apple TV+ is the latest example to hit the mark. Beyond its unconventional creation to an impactful show, it is one of the most human shows that I’ve ever watched and there is plenty we can learn from the show’s lead character and those around him.

Before we go much further, there will be spoilers to the first season of Ted Lasso throughout this post. Proceed as you see fit.

Is Ted Lasso a comedy? Yes, absolutely. It’s more than that, though. It will make you laugh during every episode, but it also makes you feel nearly every emotion possible while also causing you to reflect a bit about yourself and teaching you a few things.

I could probably go on for days about how great Ted Lasso (the character) is, but a few themes rise to the top: unfiltered optimism, emotions are real, and the ability to build culture is more important than anything. 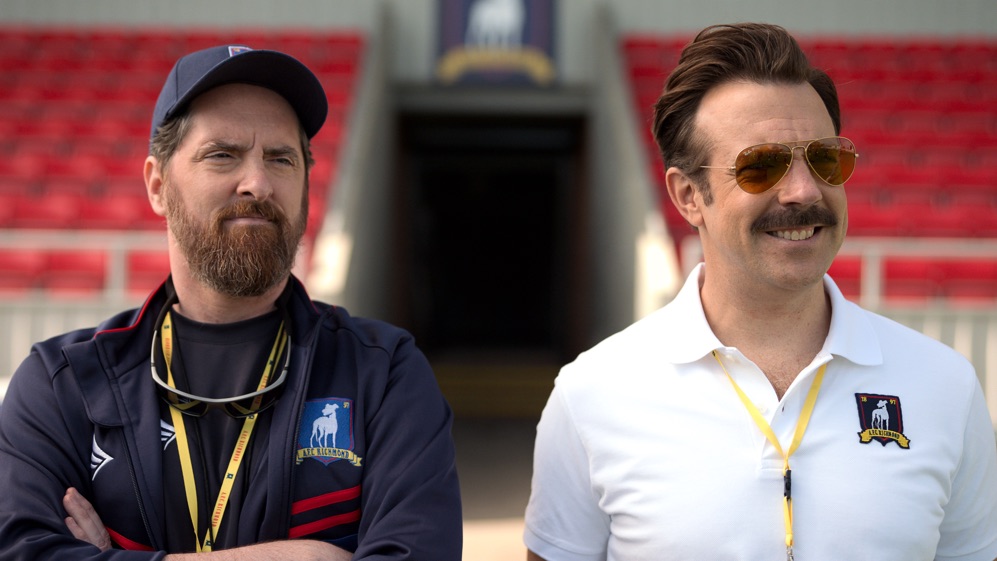 As the show begins, there is little reason for Ted to be in the position he lands in. He knows nothing about soccer, very little (if any) awareness about how he is set up to fail, and those around him have ultra-low confidence. He doesn’t allow this to define him or the task in front of him.

He takes the job seriously and does it the same way he’s done it as a college football coach: optimism.

When he hung up the “Believe” sign above his office in the locker room, not a single person there actually bought into it. They didn’t challenge it, but they just ignored it. From that point on, he never changed his cadence.

If you actually believe and take an optimistic approach to whatever might be in front of you, you are already heading in the right direction.

The final episode is one of the best in the season. As Nate comes to his house and starts to doubt if they can get the result they want against Manchester City, Ted nearly loses his mind. He loses his mind because Nate lost his belief. Ted knows the deck is stacked and the odds are against him. He can’t control those. What he can control is the motivation and mindset of his team. If Nate doesn’t believe, the team won’t. The way he storms through his house trying to find another “Believe” sign showed just how much he believes in this optimistic approach.

Then, after the heartbreaking loss, his speech in the locker room continues that tone. He ends his speech with two words: Onward. Forward. That was just the start of something, not the end of something.

As he meets with Rebecca, thinking he’s going to be fired, he not only keeps the optimistic mindset, he takes it ot the next level. Learning he still has the job, he finds out about the chance to be promoted back to the Premiere League. He instantly says they’ll be promoted, but he takes it further and says then they’ll win it all the following season.

The man just led a team to a loss and got relegated down a level in levels of English soccer, and he’s keeping the positive vibes going.

Be your biggest cheerleader and keep the positivity up.

Emotions are Real and Unknown to Many

Along with the comedy, Ted Lasso is a very emotional ride. Ted himself is going through a divorce from halfway around the world, Roy is coming to terms with the end of his career, Rebecca is blinded by her nasty divorce while trying to hold a positive face, and Jamie has little positive support from his father. The examples continue, but those were the most impactful for me.

Every character hides something from others. The team never knows about Ted’s person issues, for example. Ted can pick up on the fact that something is happening to these individuals, but he never searches it out. He shows support and shows he is willing to help, but he doesn’t go out of his way.

Ted does show his cards a bit when he has the nervous breakdown outside the club and Rebecca comes to his aid. Rebecca learns that Ted has something going on and Ted sees that the relationship with Rebecca is growing.

The final episode shines here as well. Whoever wrote his postgame speech needs an award:

“Now, look, this is a sad moment right here for all of us. Ain’t nothing I can say standing in front of you right now to take that away. But please, do me this favor, will you? Lift your heads up and look around this locker room. Look at everyone else in here. Now, I want you to be grateful you’re going through this sad moment with all these other folks, because, I promise you, there is something worse than being said. That’s being alone and being sad. Ain’t nobody in this room alone.”

As his divorce was being finalized, he was alone. He’s been there. He knows he needed that support, and it was around him the entire time.

From his first day, Ted set out to create a culture that allowed people to thrive. Many couldn’t understand this, but he never changed his ways. He knew it would take time and in the end, it all clicked.

He gave little gifts, he did little gestures. They landed flat at first, and they soon gained momentum.

Roy comes to him early on asking him to address an issue and Ted tells him he’s the captain and to handle it. He doesn’t like that, but he soon comes around. That goes further when Roy told the team to leave Nate alone. Nate, being the lowly kit man was being picked on — and even bullied. The message didn’t stick until Roy took things upon himself. He didn’t need to do this, but as Ted viewed Nate as more than just the kit man, Roy soon realized this too. They were all on the same team.

During episode three, Ted has dinner with Trent Crimm, the reporter from the Independent. During the conversation, the two have this exchanged:

The relationship between the media and soccer coaches are anything but rosy. Trent can’t fully understand why Ted likes him. This actually shifts Trent’s mind on Ted himself. This concept can be seen in nearly everyone involved with the team.

One area that Trent picked up on was his treatment of Nate, the kit man. This is an important role within a soccer team, but not the most glamorous. Ted takes a “follower” in Nate and taps into his thoughts and ideas and turns him into a leader. He gave him chances to shine and be himself. He went from a guy getting picked on to a true difference maker.

At the end of the day, the phrase “doing the right thing is always the right thing” can be attached to Ted. He let’s people be themselves, but shapes the culture he’s looking for without forcing it.

If you haven’t been able to watch Ted Lasso yet, I can’t recommend this enough. It’s easily one of the smartest TV shows in years.

Not every moment in life is going to be rosy, but that moment will pass and a new opportunity will present itself before you realize it.

Zach is a 35-year-old midwestern husband, father, son, gummy bear loving, digital communication professional. Zach has spent endless hours researching lifehacks, strategies, resources, tools, examples, and more in order to be a better person in the office and at home. View all posts by Zach Parcell